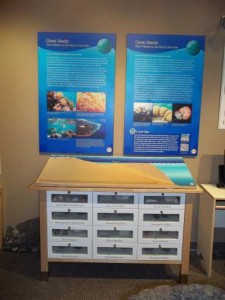 The “Tebbutt Memorial Devonian Reef Display” was upgraded with the aid of a grant of $3000 from the CGF (grant 08 14) to the Canmore Museum and Geoscience Centre. This display, commemorating the work of outstanding carbonate geologist Gordon Tebbut, describes the genesis and structure of the Devonian reefs that are so important in the geology of western Canada, and provides examples of the reef-building organisms. 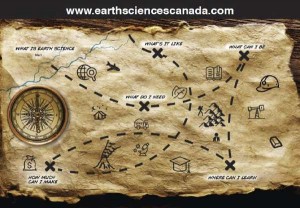 During the International Year of Planet Earth (IYPE 2007-2009), the Canadian National Committee for IYPE and the Canadian Geoscience Education Network (CGEN) partnered to produce a comprehensive web site explaining the scope and opportunities for employment in the field of Earth science (www.earthsciencescanada.com/careers). The Explore a Career in Earth Sciences web site is an innovative, comprehensive and up-to-date site for junior high school students in Canada. A 2009 CGF grant helped complete this project, and in 2011 CGF committed funding to support this successful venture over the next three years.

The publication of the New Brunswick Museum’s book ‘Rebuilt in Stone’ was supported by the Canadian Geological Foundation. The accompanying walking tours based on the book have been recognized by the City of Saint John, and the book/tour was named a recipient of the 2011 Heritage Award in the Awareness category.

The Logan Legacy Fund was established in 1992 to coincide with the 150th anniversary of the Geological Survey of Canada. It is a registered charity administered by the Canadian Geological Foundation and is a unique initiative whereby a government agency solicits private funding for preservation of rare library materials.
The first five years of fundraising were highly successful but subsequent years saw a gradual decline in donations. Annual disbursements were lower than we anticipated and work proceeded at a slow but steady pace since there are few skilled professionals in the area to carry out complex conservation work. We ceased active fund raising in 2000 having raised approximately $100,000 over the years.
Conservation activities

An important part of Canada’s geoscience heritage is now conserved for future generations; on occasion, items from this collection have been loaned to the museums in support of special research and exhibits. Access to the material is available through the NRCan Library Catalogue which holds metadata for this collection.

A grant from the Canadian Geological Foundation is supporting “Wunderground” at the Johnson GeoCentre, St. John’s, Newfoundland. “Wunderground” follows the adventures of Mr. MasterMinder, an energetic and eccentric scientist who combines science knowledge with circus performance to teach kids about the world beneath their feet. In Wunderground, Mr. MasterMinder searches the underground layers of the Province for ways to power his newest invention – The Amazing Robotic Portable Power Pack!
Collecting samples in his 9ft robotic suit, juggling “molten” rocks, and spinning Tectonic Plates are just a few of the antics that that the energetic scientist uses to enthrall the audience as he teaches them about Earth energy. “Wunderground” has been developed by the Johnson GEO CENTRE and Beni Malone, in partnership with Nalcor Energy and the Canadian Geological Foundation. The show will be available to the public in November 2010, and will run on Saturday and Sunday afternoons at the Johnson GEO CENTRE on Signal Hill. “Wunderground” will also be available from Monday to Friday for teachers and students who would like to see the show as part of their GEO CENTRE visit.
Johnson GeoCentre 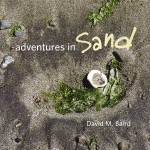 David Baird,now retired, but with a distinguished career in geology, including his roles founding directors of the National Museum of Science and Technology in Ottawa, and the Royal Tyrrell Museum of Palaeontology, has recently published a children’s book “Adventures in Sand”. The Canadian Geological Foundation provided him support in this venture through a 2009 grant award. The book is described as follows:-
“Can you remember the first time you went to the beach? You probably had fun splashing in the waves and the water. Then you laughed with pleasure to feel wet sand under your bare feet! You looked back to see the tracks your feet had made as you walked. Soon you discovered how to build forts and castles. Before you left, you may have watched as the waves wore everything away to flatten the beach again. Did you wonder where all that sand came from, and did you know that every grain has a story to tell?
Adventures in Sand explains how sand is made, how we use sand in everyday life, and what we can learn about history by looking at sand.”
The book is available via Amazon.ca and other outlets.

A Canadian Geological Foundation grant to EdGeo allowed a very successful “Let’s Talk Science” workshop to take place as part of a special session at Geocanada 2010 in Calgary on “Communicating geoscience to the public. The session, co-sponsored by the IUGS “Communicating Environmental Geoscience” working group also featured a keynote presentation from UK based professor of geoscience communication Iain Stewart, and a panel discussion.

The Grants Selection Committee of the CGF reviewed applications for new grants at its meeting in Calgary, on Thursday, May 13th, 2010, with input from the eight board members present. Twelve new grants were recommended for a total of $119,215.33 (compared to $123,220.00 in 2009). The Committee recommended that nine grants, totaling $104,007.60, be awarded from the Jerome H. Remick III Endowment Trust Fund, and that three grants, totaling $15,207.73 be awarded from the Thayer Lindsley Endowment Trust Fund.
2010 grants